The Peter Storm cagoule, this simple nylon cagoule, originally made in England and over the pond in Ireland circa 1970's onwards, a breathable, non sweating and originally pretty innovative jacket that often packed up into it's own pocket, made for outdoor use but adopted briefly by a band of match going youngsters, predominately up in the North. I bought my first several years back, aside from those I was forced to wear as a child, this was before they were deemed a little bit trendy once again, and probably the first time since the original first wave of 'dress down' people were wearing them at the football once more, I was ridiculed by the masses, well, okay, a few people, sniggered at in that way which gives you a little smugness inside, you know you're doing something right when following your own path, typically later, some of those poking fun were predictably trawling eBay for them themselves.
I've had over a dozen or so of these anoraks in my possession over the last few years, from smocks to three quarter lengths, to multi-coloured ones, bought in and then sold on, but I always revert back to them every so often. Perhaps this is a result of living in an area famous for it's rain?
I just love the simplicity of them, an ideal layer in the cooler months and great in an unpredictable summer, they have an everlasting cool in my personal opinion, so uncool, it's cool, they remind me of Geography teachers on school field trips - nice bright layer of nylon over a tweed jacket, that emergency layer that can be thrown on over anything for twenty solid years, or perhaps over a Fred Perry/Lacoste polo as worn by late seventies northern hooligans and mid eighties anti-suss post sportswear casualists. These are the coats I remember from school trips and cub camp in the eighties, worn by TV newsreaders in a downpour, Blue Peter presenters, what Trevor Cleaver got drunk in, in Grange Hill and the choice of raincoat for many hillwalkers, crown green bowlers, nerdy guides at Blue John Cavern, pensioners nipping to the shops during some drizzle, and oddly enough very peculiar nylon fetishists aswell, I've seen them on flickr. Oddballs. 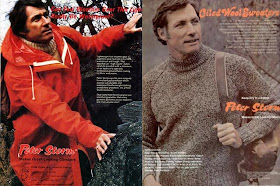 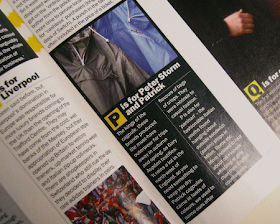 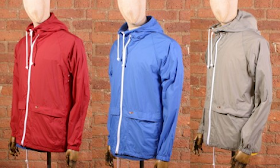 The R Newbold produced Oi Polloi cagoule (above) and the Connoisseur inspired homage, the 'Beat A Storm' cagoule and enamel pin badge. 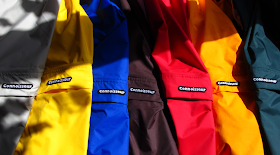 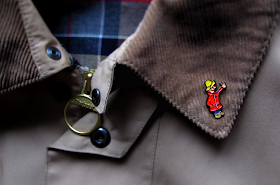 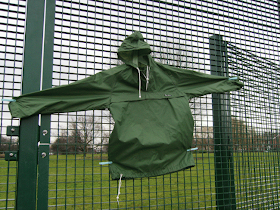 Above and below: The original overhead green smock, and the version replicated for the film Awaydays. As worn by the Pack lads. 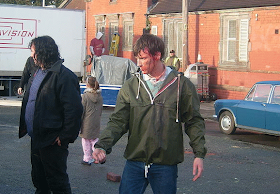 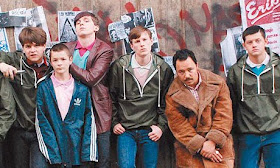 An original 'No Sweat' sou'ester hat.
Peter Storm the brand itself was created by Noel Bibby in 1954, a former Marine who served in the Second World War, Bibby formed the company to produce innovative, specialised materials for protection from the elements, they became the first company to provide 100% waterproof lightweight nylon rain wear, the first to weld together complete garments with no stitching, the first to make permanently proofed knitwear and the first with waterproof and breathable coatings with no 'pores', and of course offered out at places like Millets and Blacks at a sensible price.
To me personally it's got to be an original one, to many this shouldn't matter but to me it does, I've seen kids at the football in newer ones and it's just not right, maybe I'm a snob, but people will agree I'm sure, the simple full zip, white drawstrings and simple black and white embroidered logo is what really makes these.
One-up at 16:35
Share